In ancient times, the stories of God were passed down through generations by word of mouth.  It’s not known who first recorded these stories, but it could have been as early as 1,400 BC.  The recording of all the books in the Old Testament took hundreds of years.  Once they were all written down, the process of collecting them all together probably began around 400 BC.

Different Christian communities have, through history, come to different decisions about which books belong in the Old Testament.  They have all accepted the 39 books in the Old Testament that form the Hebrew Bible of the Jewish people.  Catholic Christians also use an additional seven books, plus some extra material in the books of Daniel and Esther. Orthodox Christians accept ten or more additional books as well as the additional material in Daniel and Esther. 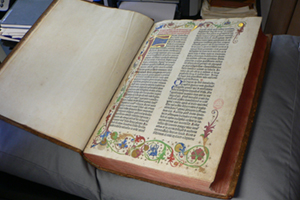 The printing press eventually made the Bible more accessible to all. This is a copy of the Guttenberg Bible, one of the first books ever printed.

The first translation of the whole Bible into English was done by John Wycliffe in about 1380. In 1526 William Tyndale produced the first printed New Testament in English.  Since then, the Bible has been translated into English many times.

The Bible was first translated into Māori by Christian missionaries who began arriving in New Zealand in 1814.  The first Māori New Testament was printed at Paihia in 1837 and the first full Māori Bible was printed in 1868.

The New Testament is available in about 1,897 languages.  Sadly, about 500 million people still have no part of Scripture translated into their language yet.  Bible Societies around the world are working hard to change this.

More about the Bible…

WHAT IS THE BIBLE? THE BIBLE STORY ENGLISH BIBLE VERSION THE BIBLE IN MĀORI